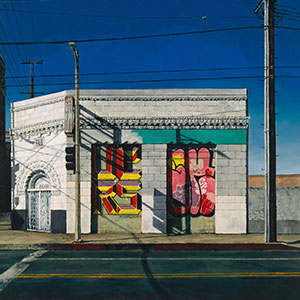 (Los Angeles, CA) – Thinkspace is pleased to present new works by Portland-based artist Stephanie Buer in Uncommon Silence, the artist’s fifth show with the gallery. Buer’s incredibly realistic paintings and charcoal drawings capture the vacant and desolate sprawl of abandoned urban spaces. An avid urban explorer, she seeks the quietude and calm of inactive buildings and areas, those marginalized and in disrepair. Capturing the life in absentia of these architectures and environments as they are overcome by vandalism, nature, and time, Buer finds beauty in the remnants that are left behind.

Buer went to art school in Detroit, Michigan at the College for Creative Studies, and spent the following decade in the area, capturing the infamous urban erosion left by the collapse of the American auto industry. In Detroit, a unique city with a host of abandoned industrial vestiges, Buer sated her need for contemplative calm and escapism through urban exploration. Interested in the layers of history that accrete in emptiness, and the stark contrast of desolation in the midst of excessively populated urban areas, Buer’s work began to question our relationship to excessive consumerism and unsustainable consumption through depictions of dissipated spaces. She likens the feeling of isolated discovery when traipsing through condemned buildings and architectural ruins, to her remote wanderings through rural Michigan where she grew up. In search of a poetic calm and beauty in the midst of what most would consider deterioration, she continues to uncover the oft-neglected sublime of the condemned and castaway.

Moving to the Pacific Northwest, where she continues to work, Buer has since begun to capture new cities and spaces through her photorealistic oil paintings and heavily contrasting, dramatic charcoal drawings. Her preference for traditional art historical media is a conscious one, fascinated by how the same media used for centuries can capture a contemporary moment without loss or inadequacy. In Uncommon Silence, Buer has taken on the city of Los Angeles as her subject for the first time, the result of a week spent exploring its recesses and urban derelicts; the works capture the light and atmospheric nature of LA in stark contrast to those of Detroit. An homage to a city that has played an integral role in the development of her career, the exhibition captures the specificity of LA as a place of great cultural and environmental contrasts, architectural diversity, fullness, and scarcity. Known for its murals, contemporary art scene, graffiti, and urban interventions, LA provided Buer with no shortage of color or drama in the landscape.

Her works begin with the journey into the city, where she documents her explorations photographically. Buer then creates compositions from her source material and executes the work with a staggering level of technical precision and detail. Always devoid of people, Buer’s works capture the traces of their intervention and the marks of their passing, whether through the shadow of the hollow structure itself or the evidentiary residues of physical interactions with the space. A recurring element in her work has always been graffiti, a primary way in which forgotten urban spaces are marked and reclaimed. The sense of collapsing temporality is salient, as old and new coexist on top of one another in these peripheries.