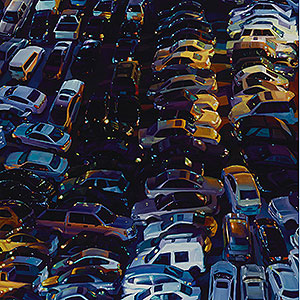 Opening Reception with the Artist(s): Saturday, April 29, 2017 6:00pm - 9:00pm
If you have any questions or would like to purchase any of the works below, please send an email to contact(at)thinkspaceprojects.com.
For more information regarding purchases, shipping and payment methods, please click here.

Thinkspace is pleased to present Pretty Deep Shit, featuring new paintings by artist Seth Armstrong. In this new body of work, the Los Angeles-based painter, born and raised, explores LA as a dystopian landscape, inspired by its off-kilter charm and its reputation for being a cultural kaleidoscope of beauty and barrenness, depth and vacancy. Known for paintings that self-consciously capture the act of looking – whether as a voyeur in trespass, a spectator in an audience, or a participant in the landscape – Armstrong captures the simultaneity of the city as a place of endless, contingent narratives, jarring interruptions, and suspenseful pauses.
Pretty Deep Shit is a tongue in cheek nod to the weight of simple things. In a time where our global and national political climate is uncertain and precarious, and the general cultural atmosphere divisive and fraught, Armstrong observes the localized, the personal, and the momentary. He looks to the poignancy of small observations, quiet corners, and unassuming moments – the intimacy of a world that continues to unfold in private spaces in spite of larger or more daunting world events. His past works have often captured a stylized take on Americana brought to life with a cinematic edge, in this new body of work similar impulses remain though they feel scaled back, more meditative and tempered, closer to observation and memory than to the staging of cinema.
The exhibition is about Armstrong’s lived observations of LA, presenting a more cohesive and intimate arrest of the city that tends to polarize or exert a gravitational pull. There’s a code of exemption in LA, a kind of freedom and fluidity from the mores of other cities that Armstrong captures through its stylization. Everything from Craftsman bungalows, parched Echo Park landscapes in the midst of drought and shiny seas of stalled cars, to motley downtown architectures, high rise windows lit by night, and voyeuristic glimpses of women in domestic spaces, reflect the ongoing, and inexhaustible, stories of the urban sprawl. Always in search of the oddly beautiful in unlikely places, Armstrong captures the grittiness and allure of a city that inspires the deepest of love/hate relationships.
Armstrong’s works offer cleverly crafted moments of suspended or anticipated action. Often the absence of human subjects alludes to their unseen presence in absentia – the traces of their proximity and activities linger in subtle seeking, much in the way the city itself is always alive with invisible stories. Though we may not have access to the narrative, its threads are implied as we move through the depicted spaces, objects, and structures. This open-ended interrelatedness is revisited throughout Armstrong’s works. A shared current connects each piece, intended in this case to be read sequentially as moments in a larger narrative arc, though each stands alone. Some offer vast views, and others contracted intimacy, moving freely in and out of public and private spaces, but they convene when seen together as a whole, and marry voyeur and subject in a single ambiguous vantage point.
Technically, the paintings are highly detailed and tend to move between looser and more painterly executions to tighter hyperrealistic ones. Each oil painting is executed slightly differently by the artist, rather than formulaically, resulting in varied physical textures and surface qualities in each. Armstrong is finessing the paintings in this current body of work, glazing details and working into the minutiae now more than ever; they feel even richer and more vibrant as a result. Though Armstrong has a preference for bright and highly saturated palettes, the tone of the work is anything but. A discomfort and strangeness loom throughout in even the brightest and most colorful scenes. His use of stark contrasts and exaggerated light contribute to a feeling of hypersensitization – a world of strange edges, soft swells, and unfamiliar intensities. Something slightly off-kilter haunts, pushing even the most seemingly familiar scenes into the realm of the subtly surreal.