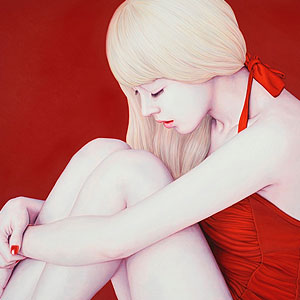 Thinkspace (Los Angeles) – is pleased to present Melancholia, the gallery’s first solo exhibition of paintings by Korean artist Kwon Kyung-yup. A graduate of Sejong University in Korea, where she completed an M.F.A, Kwon is currently based out of Seoul. Known for her pale ghostly paintings of delicately rendered figures, the artist uses the human body in her imagery as a vehicle for healing, mourning, and memory. Meditative in their starkness and otherworldly in their filmy delicacy, her figurative depictions are cathartic and emotional, suggesting both trauma and recovery, forgetting and remembering.

Kwon’s figures seem suspended in time, arrested in a sort of ageless androgyny. They are beautiful, and yet unspecific, functioning more like symbolic emblems than individual subjects. When creating her work she describes a process of emotive recall in which she revisits emotional events from her past, actively summoning memories to inspire the work. The figure becomes a literal instrument of psycho-spiritual expression through which she explores universally relatable, though intensely personal, themes of femininity, sexuality, death, libidinal impulse, transformation, and ego. The human body becomes a poetic device through which Kwon explores existential drives and deficiencies.

The artist describes her paintings as meditative spaces in which she depicts longing, sadness, and fantasy. A deliberate slowness and calm are typical of their tone and pace. A single figure, minimally adorned, tends to occupy the focus of the foreground. Surrounded by a still expanse of emptiness, there are few other details, if any, to distract from the complete presence of the form. The viewer is left feeling captivated, drawn in by the concise simplicity of the image, submerged in its heavy quietude. The figures’ skins convey a nuanced depth and pallor, an impressive range of gradation and muted color that resonates through several thin, carefully applied, layers of oil paint. Kwon’s attention to the translucent rendering of these milky skins, and the contrast she creates with subtly bloodshot eyes and carefully stylized features transports the figurative realism in her work beyond the realm of naturalism. The figures are excessively human in their pristine vulnerability, and yet entirely other, emotionally charged, and surreal.

At times, the bodies depicted in Kwon’s works are wrapped in bandages, caught somewhere between life, trauma, death, and convalescence. This space of ambiguity in which the self is suspended somewhere between a beginning and an end is a recurrent theme in her work. Measured and introspective, Kwon’s process is thoughtful rather than reactive, and each piece takes up to two months to complete. She begins her paintings in a contemplative state, a literal meditation aided by conscious breath work, and carefully allows the surface to live, extracting wraiths from the void.