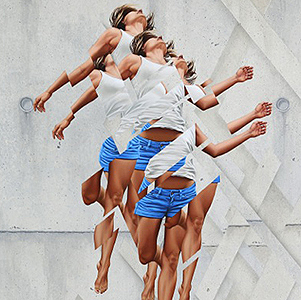 On view in the Thinkspace project room is Breaking Point, featuring new works by American, Berlin-based, artist James Bullough. A technically accomplished painter who creates with a staggering degree of detail, Bullough begins with figurative imagery, disjointing and levitating its fragmented parts impressionistically to build dynamic surfaces that read with startling affective resonance.

In this new series of works, Bullough captures moments of existential fracture, disruption, and personal breach through the expressive movement of the body, asking his models to channel personal memory and to recall experiences of “breaking” at the moment of their capture. Working with dancers from Berlin, Bullough begins with the body in motion, arrested in an expense of negative space, then dissembles it further, splicing, striating, and fragmenting its surfaces and planes. The models remain anonymous and faceless throughout, an omission intended to reaffirm the symbolic universality of the emotive physical gesture.

His technique and style have evolved significantly over the past three years. Earlier works involved graphic additions and interruptions, with areas of the figure clearly removed. Now the works are increasingly dynamic as the bodies’ interrupted segments have been shifted and activated, rather than deleted. Areas of the figure are superimposed, vibrating with transitional movement rather than apprehended in static still. Each piece is created primarily with a minute #1 brush, a preference the artist has cultivated for its control and detail. Working on canvas, reclaimed wood flooring from a Berlin dance studio, and panel, Bullough continues to experiment with his materials and ground.