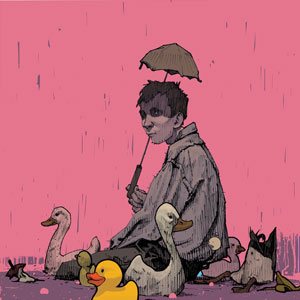 Thinkspace (Los Angeles) – is pleased to present the very first Los Angeles exhibition of renowned Polish duo Etam Cru, in Galimatias. Considered two of the best muralists working in the world, Etam Cru is made up of individual artists Bezt and Sainer. They began making work as a pair in art school, both 2012 graduates of The Academy of Fine Arts in Lodz, Poland, and have embraced a playful irreverence in their sensibility ever since. Bezt and Sainer have been refining their synchronistic style as Etam Cru, inspired by many of the same interests and themes, while developing their individual voices in tandem. Working collaboratively on site-specific public murals, the duo prefer to work independently on their respective exhibition works, allowing each to define their own use of space. The rapport and connection between their individual styles and approach is clear, however, as each draws the viewer into an intoxicating world of surreal fantasy, folklore, and graphic precision.

Known for their focused realization of ambitious and monumentally scaled works, the pair is famously resistant to the ascription of excessively symbolic readings, preferring instead to let the aesthetic and physical experience of viewing the work speak for itself. In keeping with this open-ended, and evasive, penchant for ambiguity, their name “Etam” loosely translates from Polish to “whatever” or “I don’t care,” though this namesake is intended in the spirit of creative freedom and subjective association rather than in that of flippancy or dismissal. Both Bezt and Sainer encourage the viewer to create personal readings of the work, and to draw their own conclusions about what their loose symbolism means. True to this unrestrictive preference, the exhibition title Galimatias, a French word meaning “gibberish” or “nonsense,” suggests an allegiance to the power of imagery rather than to the defining imperatives of words.

Working with a combination of media for individual works, including oil and acrylic on canvas and graphite on paper, but preferring the use of canned house paint and rollers for the execution of their huge murals, (though spray paint is also incorporated), Etam Cru mix their own pigments and create their own unique colors. The vibrancy and contrast of their palette is one of the many distinctive aspects of their work, ranging from saturated primaries to subtly graded pastels. Their imagery often incorporates the surreal and the grotesque, and plays expertly with shifting scales and unique environments. Often including animals and playful elements from nature, their compositions are simple and poignant. Though the two have evolved their aesthetics dynamically, each informed by the other, Bezt is known for his use of more graffiti inspired styles and characters, while Sainer tends to take a more realism based approach to figuration and the depiction of nature. Though the two hands remain distinctly visible, the end result of their collaborations is seamlessly balanced and subtly nuanced.

Etam Cru has created spectacular works all over the world, including public architectural murals as large as 10 stories tall that require a whole arsenal of scaffolding and cherry pickers to complete. The team came to the U.S for the first time in 2013 to create their internationally acclaimed mural Moonshine in Richmond, Virginia, for the Richmond Mural Project; an amazing, epically scaled, rendering of a beautiful female figure, sitting in a jar of muddled strawberries, kept companion by a single bird. The piece was listed among the top five best pieces of street art in the world in 2013. In conjunction with their exhibition, Galmatias, Etam Cru will be transforming the six story facade of a building in the flower district in Downtown LA, gifting the city with its very own permanent piece; one of undoubtedly enviable proportions.