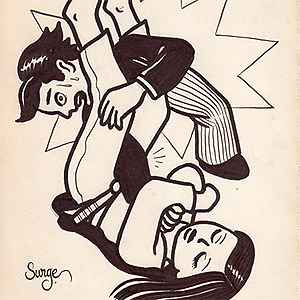 In conjunction with Marvelous Expeditions, Dabs Myla will be curating the Thinkspace project room with new work by Sergio Hernadez (SURGE MDR). Hernadez is an artist informed by a multiplicity of media and styles deeply rooted in the culture of the urban landscape. Known in the San Diego graffiti community as SURGE MDR, his work has continued to inspire Dabs Myla and elicit their admiration.

Born and raised in San Diego, CA, Hernadez has felt a life long filial connection to Tijuana Mexico. As a child, he frequently visited and was inspired by the hand painted advertisements throughout the city, a sort of prototypical forerunner to his interest in graffiti and the city as a canvas. He studied painting and printmaking, and received a BFA from San Diego State University in 2004. Hernadez’s painting and drawing practice is inspired by the city, and the characters and encounters from his life. His work is often memory and narrative based, and is founded in the stories from his childhood or those gleaned from experience. The work is at times playful, and at times dark, but the characters that proliferate his stories are intended to be universally enjoyed by children and adults alike, an inspiration from his wife and children. His prolific work as a graffiti artist, tattoo artist, illustrator, and painter speaks to his dexterous, and graphic, versatility.