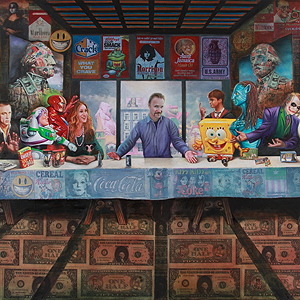 From the Press Release:
Thinkspace is honored to be working with producer/director/writer/collector Morgan Spurlock (The Greatest Movie Ever Sold, Supersize Me) on his debut curatorial project. New Blood aims to showcase artists that Spurlock feels have changed the art world forever and has in turn given each of them the chance to invite a protégé of their choice to profile alongside their own work in this very special exhibit.

Thinkspace’s Andrew Hosner comments “We’ve worked closely with Morgan for a number of years now and ever since I interviewed him for our blog a couple years back I’ve wanted to run the idea by him of a curatorial project. Fast forward a year and one day while catching up via phone I just threw it out there to him and he loved the idea. He came back to us a month or so later with a fully realized concept for the show and a wish list of artists to approach. Morgan has always been about helping out and supporting up and coming artists, so to see his vision for this show come to life has been very rewarding.”

Morgan talks a little about his ‘New Blood’:
“I’m a massive art collector who, by way of my habit formed a relationship with Thinkspace’s Andrew Hosner, and when he offered me the opportunity to curate a show I jumped at the chance. The concept of the show is how the torch is passed from one artist to the next. One opens the door so another can follow. And this show is all about artists who I think have and are continuing to impact and change the art world, and each one of these artists is bringing along an ‘apprentice’ or ‘protege’ who they think we all need to know about, the artists they believe are the ‘New Blood’ of the art world.”