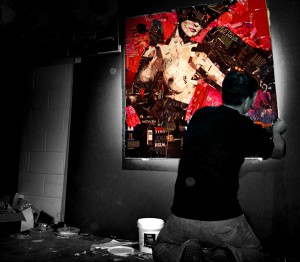 In his popular collage portraits, Derek Gores recycles magazines, labels, and assorted found analog and digital materials to create the works on canvas. The series showcases Gores’ contrasting interests in the living beauty of the figure, the mechanically angular and abstract design aesthetics of fashion, and a fearless sense of play. Also a successful designer and illustrator for 15 years, clients include ESPN, Lenny Kravitz, Lucasfilm, Kings of Leon, U2, Adidas, Madonna, Harley Davidson, 321 Agency, the National Football League, LiveNation, SEIU, Love Haight Apparel, Draftfcb and JCPenney.

The Rhode Island School of Design grad lives and works in Melbourne, Florida, exhibiting and curating with the bold upstarts there, surrounded by the intellect and culture of the Space Coast. Recent adventures have taken his work to Chicago, Los Angeles, Miami and Sacramento. Derek was honored to have his work selected for the Manifest Hope DC exhibit coinciding with the Presidential Inauguration in 2009.

“I like my pictures to barely come together with teasing little details. Sort of like how the mind can’t help but wander, even when trying to focus on one thing. In the collages, some of the little bits I use are deliberate, but in most I’m trusting randomness to help build an end result more interesting than I could have planned. One friend calls it a ‘Zen Narrative.’ ”

His subjects are simply figures and objects in a space, influenced by heroes Gustav Klimt, Egon Schiele, Franz Kline, Rube Goldberg, Max Ernst, and, “those great old long-exposure photos of Abraham Lincoln where you can feel the whole minute inside each image. I love that buzzing stillness. I do reference a classic beauty, but made of raw and geometric and un-designed parts, so I feel it’s a contemporary beauty too. I’m not interested in heavy, conscious concepts- I make something simple and let the elements combine in the head, reacting with each history the viewer brings to the table. When it goes well, I hope to create a real experience, instead of just a picture of an experience. But that sounds a little too huge… really I’m searching for that feeling of having the eyes of a kid, where everything is new.”

Gores just wishes he had a cooler name than ‘collage’ for his medium. “I’m thinking of calling myself the ‘Scrapbook King of the Southeast’. What do you think? (Sausage King of Chicago was already taken)”