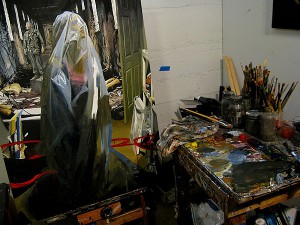 Adam was born and grew up in Massachusetts. He also lived in Maine, Tennessee, and in France. He began drawing at around 1 or two years old. His parents would place some paper in front of him and give him a pen and he would draw for hours. Throughout his childhood he never stopped drawing, started copying comic books, and then tried writing and drawing his own. After high school and an aborted attempt at a career as lead guitarist in a progressive metal band, he moved to Oakland CA. For years he worked many jobs: warehouse worker, bouncer, house painter, dishwasher, waiter, and cook. He spent most of his free time playing guitar, drawing and reading every book he could get his hands on. His main influence in art at this time was underground European comics, he drew his own short comics and tried a couple graphic novels. In the early 1990’s he decided it was probably a good idea to go to school.

He studied art at Laney Community College, and then in 1994 received a scholarship to study at the California College of Art. Initially interested in drawing and writing graphic novels, Adam began to study oil painting which seemed like a better fit for his ideas and interests. After two years of study he took an illustration class with renowned artist and teacher Barron Storey, who inspired a passion for illustration and a more democratic view of art making than the elitist world of fine art. Adam then focused on a double major in Fine art and illustration. While a student he began working as a Teachers Assistant and taught several substitute classes on his own. He received a BFA in illustration and fine art in 1998. Post-graduation found Adam exploring various avenues in the arts. He tried illustration, storyboarding, and concept art, but was not really at home doing commercial work. In 2001 he began teaching at the Academy of Art University in San Francisco. Teaching full-time allowed him to work without any constraints and he experimented in various forms of drawing, collage, and multi-media work. In 2007 Adam realized that the art he had been making was not what he really wanted to do. He had been working in an isolated sphere. He slowly began painting in oils. He moved into a large warehouse studio with fellow teacher and Korean-born artist David Choong Lee. In a space that was constantly visited by gallery owners, art clients, and working artists, Adam began to develop quickly. He constructed collages out of drawings and found images that he used as the basis for painting. He soon began showing in small group shows in SF and then in LA. He moved studios several times and now has a small solo space in the Mission district in SF. He shows at White Walls gallery in SF, at Thinkspace in LA, and at Rook and Raven Gallery in London. He also sells prints and original work through the online galleries 5Pieces and 1XRun. In addition to painting Adam has been teaching and competing in Martial Arts since childhood. He was the 2001 USAWKF National san-shou champion and has competed in amateur thai-boxing. He is an instructor at EBM kung-fu in Oakland CA. He is still pursuing his dream of being a guitar legend.